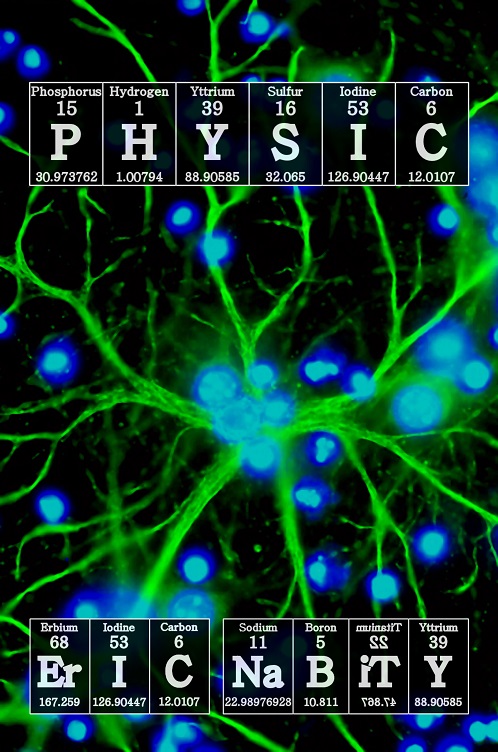 Ysenof can interact with the world on an atomic scale. This allows him to manipulate matter and energy, but his autistic mind's focus on underlying fundamentals leaves him poorly equipped to deal with people, communication and bureaucracy. He has the potential to change the world, but needs help if he's going to leave his mom's house and make it happen.

Ysenof meets two of his future teammates and an enemy in a literally explosive encounter at a Walmart. The incident is incited when Ysenof unwittingly flattens a pyromaniac that can release energy from matter. During the chaos of the explosion and fire, the pyromaniac disappears and Ysenof meets John Clark and Abby Skipper as he looks for his mom.

Abby is a mind reader that demands attention and enthusiastically communicates with a poetic sensibility. FBI Special Agent John Clark has been intuitively tracking the pyromaniac and is determined to get his man before he wreaks more destruction. As John brings them together to consult for the FBI, Ysenof begins to study what makes them special, what makes them PHYSIC.

Together, the group finds that the physic riddle goes beyond the pyromaniac. They discover a homogenous group of young physics with heightened coordination and group telepathy they suspect of bank robbery and terrorism. These kids are the focus of a new wave religion that seems connected to the origin of physic potential. As a conflict develops, Pauline, a nearly indestructible woman with a violent alter ego, Nemesis, joins Clark's physic crew.

Ysenof will need to expand his understanding beyond low level physics to unravel the mystery of being physic.

1_epigraph.Start
retrieved from The Arizona Republic at AZCentral.com:
"Suspected Arson at Mesa Walmart"
by Tatianne Hiker

Five sustained serious burns in a fire as shoppers and employees were forced to evacuate the Walmart Supercenter at Riverview Mall in Mesa Tuesday morning. Witnesses say the automotive aisle burst into flames with no apparent cause.

"The whole thing went up like the Fourth of July," said witness Jorge Rosales. "It was exactly like being in one of those big budget action films."

Abby Skipper was in the aisle where the fire started and had some very interesting things to say about the events. "I was in the belly of the bomb-belching beast of Machiavelli! There I spied the ogre of origin from a vanguard viewing position. The pyromaniacal plot was intended to reprimand my friend for an offense without pretense! The splendid citizens of the sunny sans-summit should sleep serenely recognizing and cognitizing that Mr. Clark will catch the crazy criminal before a reprising of his cuckoo cauterizing and surprising."

Fire Chief Ray Harbeck commented that the pyrotechnics were probably greatly exaggerated. The Mesa fire department had little trouble containing the fire, and despite panicked shoppers, no one else was seriously injured during the evacuation.

Also at the scene was FBI Special Agent John Clark. Agent Clark declined to comment about whether the FBI considered this fire to be part of an unstable individual's plot for revenge.

No trace of accelerant was found according to Chief Harbeck, but he noted that some of the petroleum products in the aisle may have been used to initiate a small explosive reaction sufficient to alarm witnesses. The resulting fire did significant damage to the automotive department.

In a statement, Walmart General Manager Lucia Hernandez said, "Work will continue around the clock to reopen our store quickly in order to minimize inconvenience to our valued customers."

I particularly dislike going to Walmart.

This is not because the stores are dirty or bad or I do not like the people there. Walmart is intrinsically a perfectly fine chain of department stores. My problem is that there are too many people. How anyone is actually able to concentrate on their shopping while dodging all of the people clogging the aisles is beyond me. It is not beyond my mom, because she insists on shopping there. I only went along on this particular occasion to make sure she bought the right food.

It was a good thing that I was in that Walmart when I was. No, I did not stop the explosion. I did not save the day or defeat the bad guy or impress the girl, but I did meet the people that started me down the path to these things, at least to the first two. When my mom shops for clothes or stuff for the house, I get bored and wander off to the automotive or home improvement departments. Those are the places with the most interesting chemicals to play with. I do not mess with drugs or hygiene products, because it is too easy to accidentally harm the human body with a slightly modified chemical.

Now, you may be wondering why I am talking about modifying chemicals. I do not carry a chemistry set around with me. I have something much better. I am a physic.

If you do not know what a physic is, that is because I coined the term and have not had the chance to tell you what it means. I can command the form of the universe; at least the parts which are important, by which I mean the portion that is proximal to me. Matter and energy are merely information, and I see and understand the nuances of the code. This allows me to change what I have into something better when I want. Of course, it is not that simple, otherwise I would have an unlimited supply of what I want and this story would not be that interesting.

The same rules that apply to regular engineers apply to a physic. First, you can not make something from nothing. Our environment is rich in matter and energy, so that is the easy part. The most difficult part is understanding what you have. Most materials can be penetrated by some sort of electromagnetic energy. It is not even that hard to get electromagnetic waves to spontaneously interact with a material they are passing through. What makes the process difficult is that there are significant limits to how well small particles like atoms can be located, and their current state measured.

One might think that energy is all around us. Room temperature is approximately three hundred degrees centigrade above absolute zero. There is a lot of energy in an area that is room temperature. All of that energy is not readily available. To do the work of transforming matter, that energy needs to be in the right place at the right time. This is difficult to do when the energy wants to disperse the moment you corral it. The kicker is that you do not completely understand what you have, so the process becomes a game of controlling a small environment so it becomes highly probable that what you want to happen, happens. That is the gist of physic alchemy.

This brings us back to Walmart and the automotive center.